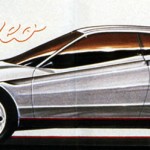 After a year without a Spider and 7 years without a GTV model, Alfa Romeo introduced the new Spider and a 2×2 coupé, the GTV at the 1994 Paris Motor Show.

The wedge shape of the two models had a mixed appeal with the Alfisti. Both models were almost identical, sharing engine placement and front wheel drive. Never the less, the ‘lightning’ shape won the fans with it’s avantgarde looks. A big influence on the final design came from the ‘Proteo’ concept designed by the Centro Stile Alfa Romeo in 1991.

The initial launch was planned for 1991. but had been postponed due to Fiat group CEO, Paolo Cantarelle’s wishes to incorporate an advanced rear multi-link suspension system. Thanks to that, the 916 models had no competition in it’s class in handling and drivability, to the expense of a rather small baggage compartment. That was also achieved thanks to a stiff chassis. 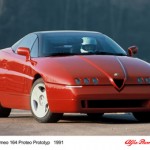 In late 1996. the MY1997 featured a 3 liter V6 24 valve engine with 220bhp, a great performing and sounding Alfa V6. Momo leather seats were also included for both models. 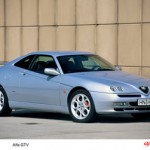 In 1998.the 916 series got a first facelift, the so called Phase 2. Main differences from the first model include a new grille, which is now chrome matching all other Alfa models at the time. Other changes were colour coded side skirts and bumpers and a redesigned interior, which was then available in 3 colours – black, red and blue.

The new interior had a different center console with round vents, similar to the 166, and seats were slightly raised. An ‘Aero’ kit was added as an option, with a small front splitter and rear spoiler. The 1.8 liter 16 valve 144bhp engine was available as well. Additionally, Alfa boosted the 2 liter 16V engine power to 155bhp and added a 6-speed transmission box to the 3.0 V6 24V engines as standard.

In the year 2000. production of the 916 models was moved from Arese to the Pininfarina factory, and Euro 3 norms see power reduced on the 2 liter model back to 150bhp, and the 3 liter V6 24V engine from 220bhp to 218bhp. Production was ceased for the 2.0 V6 TB engines as they were unable to reach Euro 3 norms. Interior trim was slightly upgraded using better materials for the center console. Instrument clocks were black again.

The 916 series got a last facelift in 2003. which was the most radical one. Pininfarina shaped the new front end that matched the rest of Alfa’s line at the time. Cars now had a noticeably larger front grille with chrome bars, a modified front bumper and different wheels. Seating position was improved and the center console was redesigned again. Interior illumination was also changed from green to red, like all other models from the range. Both teh GTV and Spider received a modified suspension and new engines – a 2.0 JTS with 165bhp and direct injection and the legendary 3.2 V6 24V with 240bhp, known from the 147 and 156 GTA models, replacing the 3.0 V6 24V engine. ASR was included as an option for both new engines. The 2.0 T.Spark engines were available in basic, the 2.0 JTS in ‘Medio’, and the 3.2 V6 24V in ‘Lusso’ models. 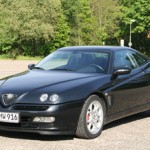 With the standard line, a few special editions were available, mostly in the German market. In 2001. a Spider ‘Edizione Classica’ was available in black metallic paint and light gray interior with 2.0 T.Spark and 3.0 V6 24V engines and 17″ alloy wheels. The same year, a GTV ‘Edizione Sportiva’ was also available on the German market, limited to 500 pieces. It had Zender side vents, white side repeaters, 17″ alloy wheels, black metallic paint, red floor carpet and black leather electric seats with red stitching. 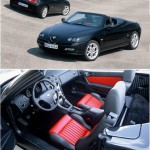 The last special edition was the ‘Edizione 20047, both for the GTV and Spider. It was limited to 200 pieces, in red or metallic blue paint matched with the interior colour and 17″ alloy wheels. The ‘TI’ edition was only available with 2.0 JTS engines. 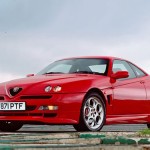 A ‘Gtv Cup’ competition was held in Italy in 1999. and 2000. and the racing model was equipped with the existing Zender spoiler kit, but with a new front splitter. The special ‘Cup’ edition was available, visually identical to the racing version, with satin 17″ alloy wheels and partially leather interior. This special edition was available in silver and red. The silver editions had 2.0 T.Spark, and the red 3.0 V6 24V engines. Red editions were limited to 155 pieces in the UK.

A few countries had another special edition avalable, the ‘Edizione Limitata’, limited to 600 pieces, available in yellow. The available engines were the 2.0 T.Spark and the 3.0 V6 24V, depending on country.

More invaluable information on standard and limited editions can be found on our member’s personal page Bozhdynsky.com.